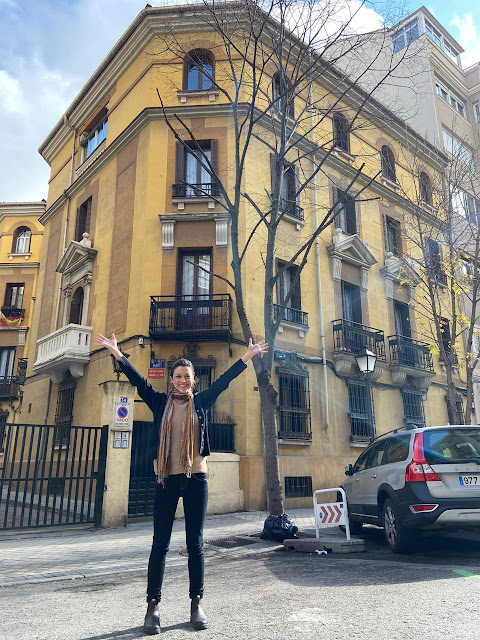 This blog post has been a long time in the marinating process, and I finally made time to sit down and write it. I have been in Madrid now for almost two months, and I still have the feeling of being at home that has been present since the beginning.

Since I last wrote I have completed my TEFL course at TtMadrid (this was probably the most well organized, clearly structured intensive course I have ever taken!), taken three weeks of intensive Spanish, moved to a new apartment, and found a job.

There were thirteen of us in the TEFL course. We all got pretty close during the program and I have gotten even closer with some of the people since we finished. I've also made friends in my Spanish class, and with different combinations of these groups have enjoyed hanging out to practice Spanish both by speaking only in Spanish with each other and by going to activities in Spanish. For example, a fantastic improv show called Improcafé at La Escalera de Jacob or a micro theatre event by a group of Argentinean actresses at a bar called Café Viralata. I already have some favorite cafeterías and bars and I'm trying new ones every week.

The apartment I had booked from the states had five bedrooms in total (so four roommates), was in a wonderful location, and I liked my little room with a big window looking out on the street. Except the room smelled very strongly of...cigarette smoke? No. Mold? Maybe...actually no. Particleboard furniture! (So formaldehyde and other chemicals.) After a few weeks of communicating with the management company and trying to figure out exactly what the smell was, I concluded that it was too strong for me to stay in the room for the full six months. Luckily I was able to find someone who wanted to take the room, and I found a different apartment one street over. I liked the first place, but I LOVE my new place. I have one roommate (we get along great and she is Spanish, so we only speak Spanish together!), my room is about twice as big as the first one, I am in the same neighborhood that I already loved, my room has a balcony, and my rent is lower!

My new apartment wasn't furnished, so I've been finding used things on Wallapop (a website/app for secondhand things here). One of the things I bought was a mesita de noche (a nightstand), and when I arrived it was bigger/heavier than I had realized. The woman who sold it to me generously offered to help me carry it the 10+ minute walk to my apartment! I've also DIYed decorations for my walls, washed the labels off of jars to make vases, and increased my plant collection from one tiny cactus to five plants in total: three cacti, a peppermint plant, and a hanging plant called amor de hombre.

And on the job front, I got hired by a language academy here in Madrid to teach classes to adults. I start on March 2nd with about nineteen hours a week, and I will get a full time schedule (around 26-28 hours) starting in April. I am excited and nervous to start. I taught six "practice" classes (but with real students) during the TEFL course. I enjoyed them and they went really well overall, but I still feel very new to teaching!

I can see myself living here for a long while. There is something about it that I can't quite capture in words, but being here just feels right. I visited Barcelona last weekend (being able to do that feels surreal). It was a great trip and I enjoyed exploring (especially La Sagrada Familia), but I didn't have the same feeling there, and when I came up the steps of the Tirso de Molina metro station upon returning to Madrid I felt something in me relax.

The apartment buildings here only have one rather small trash can for the whole building, but it's fine because the trash gets picked up every night. To recycle I go to the containers in a plaza a couple streets away and sort everything into material-specific receptacles.

One of the first few mornings of the TEFL course I walked through the metro station to the sound of a live accordion playing La Vie en Rose. If I had to pick, that is one of my favorite songs.

There was a power outage one morning in the building of my first apartment, so I put on makeup using the ambient light from the streetlamp outside my window.

Another evening I was walking through rainwashed streets (on one of the few days of rain) and it happened to be the moment the streetlights on all of the buildings came to life for the night.

There is a natural wine bar in Mercado de San Fernando near my apartment. Organic grapes and nothing added during the process of making the wine. My friend Nicole took me there a couple weeks ago and I had the best glass of wine I've ever tried.

The plaza near my house is full of pop-out flower shops that scent the air throughout the plaza. On streets nearby the smell is fresh fish as the pescaderías wash down the inside of their shops and push the water into the street when they close up for the night.

Signs nearby remind people to clean up after their dogs with the phrase "Suerte es tener un barrio limpio" and a drawing of a foot about to step on a pile of poop. Some people heed this and others don't, so it is wise to keep an eye on your feet while you walk.

In the more touristy parts of the city there are street vendors selling sunglasses, jewelry, purses, and trinkets on cloths spread out on the ground. There are cords tied to each corner of the cloth so the whole lot can be suddenly grabbed up to move locations. I assume this is because the vendors aren't technically licensed, but I don't know for sure.

Castañas asadas are a fun snack while out wandering the city. One weekend I went on the Saturday cultural activity from the Spanish school to the Mercado de Motores (a monthly market that happens in a train museum that used to be a train depot). While there I got some castañas and was rewarded with the opportunity to learn some new Spanish vocabulary when I opened on up and discovered a gusano, which means worm. Outside of the mercado, in the flea market section, we stood in a light drizzle and listened to a band play Beatles songs. 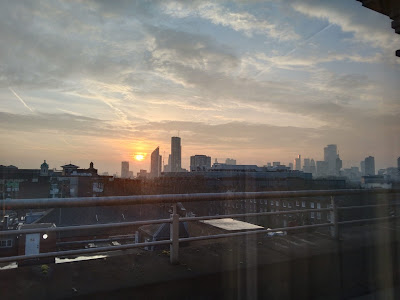